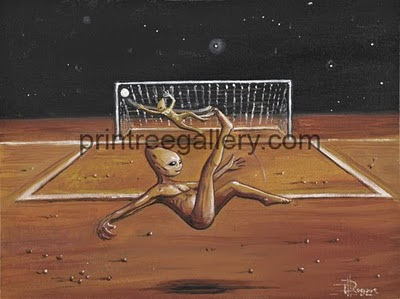 Bridges’ team used high tech Translator devices to hold a press conference and found out aliens became increasingly upset with the performance of their favourite teams on planet Earth and decided to quickly organise a World Cup of their own.

Brance’s coach told NASA he watched the qualifying games on Earth closely and disguised himself as a leprechaun because he thought it was a good camouflage. He explained he felt bad when his favourite football star used his hands to guarantee a place in and that he later became depressed because TITA wouldn’t let him change his team’s name to Trialand.

Bridges’ team then asked Brance’s coach what team his nation supported instead. The coach burst into tears and explained he preferred not to answer that question as they have all been knocked out of the World cup.

Bridges’ team finished the press conference by asking Brance’s coach if he didn’t feel would be a safer bet. He replied that is a large country with too many supporters and that if their own biggest TV channel has started a negative campaign against their coach that he wouldn’t be the one to support this team. He finished by saying he is supporting Ghana based on humanitarian grounds.